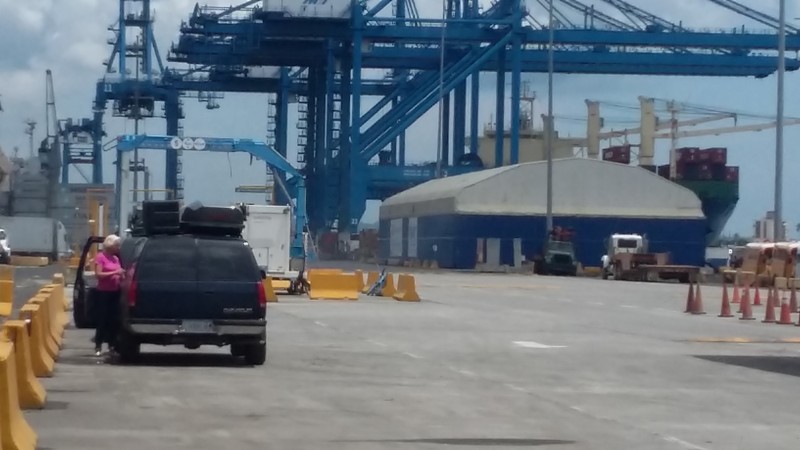 No, not the mountainous divide which separates the eastern and western water drainage in the Americas but the lesser known divide which separates the North American continent from South America. It is possible to drive the entire length of the Americas from Alaska to the tip of Argentina except for about 60 miles within the Darien Gap, a wild, densely vegetated region renowned for its flora and fauna and reportedly some scary people. A few have attempted the crossing on foot some of whom have never been heard from again. A road probably could be built but the powers that be chose not to build it, drug trafficking and revolutionaries notwithstanding. To cross this gap with a vehicle there is but one way to do it- ship your vehicle from Panama to Colombia and fly or boat yourself across to meet it on the other side. Sounds simple- it is not.

The Gap is a huge psychological crossroad on the trip as well. Up until this point we were able to turn our vehicle around and return home (oh, that’s right, we don’t have one). We’ve been on the road for over eight months and driven 12,000 miles but somehow making the commitment to ship our vehicle from one continent to another seemed more permanent. We’ve read about other overlanders who have negotiated the red tape and stress but standing on the edge before the leap across was another matter altogether. Are we getting cold feet? Does this make sense? If we ever want to return to North America with our vehicle we’d need to do this all over again. Some overlanders have sold their vehicles in South America and we could do the same but we’ve grown attached to our wheels.

We named our 1998 Chevy Suburban, Amelia, during our first week on the road in the States back in October. You know what they say about naming stray cats and dogs…don’t do it because you’ll keep them. It’s just an old truck, but she has become so much more to us. She has taken on her own identity like another living being or at the very least an extension of ourselves. We’ve even caught ourselves wondering about how scared she must have been sailing across the sea all alone in a pitch dark container- weird! How could we sell her? But how could we bare to go through this again? Yet the continent of South America had been beckoning us so we proceeded.

Making the arrangements in Spanish for exporting a vehicle from Panama and importing it to Colombia without us inside of it required patience, stamina, money and the acceptance that we wouldn’t know what the heck we were doing most of the time. Thankfully we were able to share a 40’ container with Hernan and some of his friends from Argentina. He was returning to his home country after working in Mexico for eight years. Without their help we’d probably still be standing in lines for unknown reasons waiting to have some paper signed and stamped by any number of officials over several days in numerous locations while standing in the blazing sun. We just followed Hernan around like puppies while he figured the whole thing out and we waited and waited until the whole crazy process came to an end and we were reunited with Amelia on another continent!