OK, I know what comes to mind when you think about Medellin- the time when it was the cocaine induced murder capital of the world and stories about old men flocking to the city for sexual encounters with beautiful young women. Well that’s old news, or at least that first part. I really can’t speak about the motivation of the men (old or young) coming to Medellin. I have noticed that the women of Medellin (Paisas) are known for their attractiveness, are conscious of their sex appeal and dress accordingly even though at times their contorted attempts at walking in their 7” high heels on steep inclines in this mountain city look a little silly. And ladies, one more thing- you value your long luscious dark hair so why on earth do you muck it up with very wide blonde streaks? But I digress.

Colombia, and Medellin in particular has gotten a fair amount of attention in the last few years as a place to notice for its economic growth and entrepreneurial opportunities. Bustling with more than 2.5 million, Medellin is a city of industry and commerce. Set in a mountainous valley surrounded by jagged cliffs at about 5,000 feet, the “City of Eternal Spring” is considered by many an ideal city for living and conducting business. In the 1980s the city’s entrepreneurial spirit was showing its dark side. Under the violent leadership of Pablo Escobar, Medellin became the capital of the world’s cocaine business. The city’s homicide rate was one of the highest in the world with frequent gun battles. The beginning of the end of the violence came with Escobar’s death on a rooftop by Colombian police aided by the US in 1993. Various and complicated reform efforts toward peace and stability have proceeded over the years with failures and successes. While Colombia’s international reputation as a dangerous country of kidnappings and cocaine continues to fade, the national tourist board began a campaign in 2008 to attract visitors. “The only risk is wanting to stay,” it said. Today Medellin is reportedly one of the safest cities in Latin America and with that said we still found ourselves conscious of our surroundings and the gap between the haves and have nots.

We stayed in the best barrio (neighborhood) called El Problado. The city made the decision to move the primary business district investment to El Problado from the Centro area. This is where the money resides. A combination of high rise business buildings intermingle with low rise and high rise residential areas heavily peppered with restaurants, and cool boutiques. The choice is staggering and reminds me of a combination of Chicago’s Gold Coast and Lincoln Park. The restaurants and even the hair salon where we got out cuts are open to the outdoors and the air temperatures and lack of noticeable mosquitoes were so pleasant. 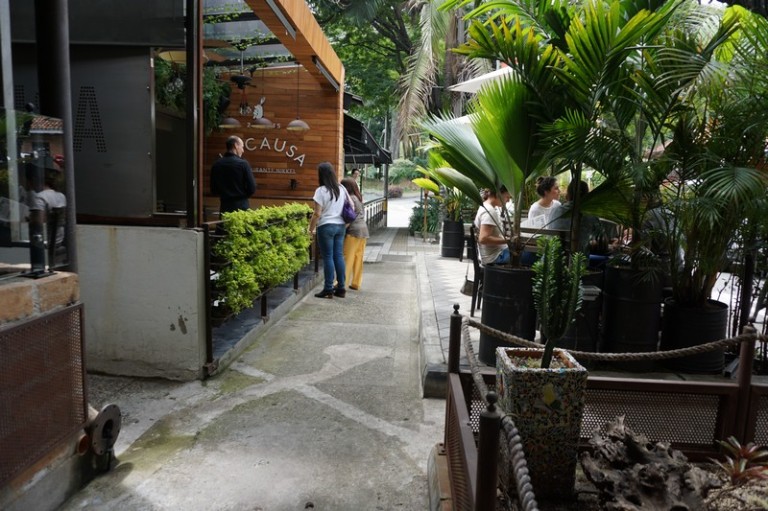 The modern, cheap and efficient Metro transports the masses from one end of the valley to the other and reduces traffic. We rode it to the stop connecting to the Metrocable, a gondola lift system with the purpose of providing public transport (the first in Latin America) to the Santo Domingo Barrio. This tightly packed, less affluent neighborhood is built into the mountainside on such steep inclines that buses cannot service much of the area. Inside the confines of the gondola we peered into the everyday lives of the inhabitants below. This neighborhood with its patchwork of rusty corrugated tin roofs held in place with random bricks and rocks couldn’t be more different from the posh El Problado. A few artistic residents painted their roofs with grand scale murals presumably thumbing noses at their shabby neighbors. 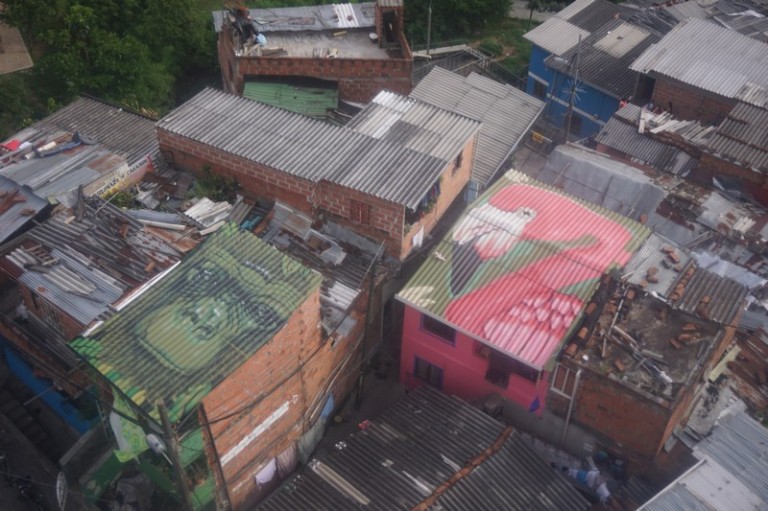 The Metro stops in Centro which is home to the Museo de Antioquia in the grand art-deco Palacio Municipal with an extensive collection of works donated by native son Fernando Botero. The adjacent Plazoleta de las Esculturas has more than 20 of his sculptures. Medellin proudly displays the massive collection in Botero’s home town and it is beyond comprehension how one man could produce the volume of art which we’ve viewed in both Bogota and Medellin. Lunch at a local’s only café in this neighborhood gave us a welcome contrast to Poblado.

As always the best part of our travels is meeting people, socializing and comparing notes about our adventures. On the Metro we ran into surfer Dan from Australia with whom we hung on the beaches of Oaxaca three months ago! Shopping in the same stores for eye glasses we met an expat couple new to Medellin via Cuenca, Ecuador and Mazatlan, Mexico. Over dinner we exchanged tales with a few others- one women who had been traveling for two years since retirement, a journalist who has lived in Latin America among many other worldwide locals for research and a woman who has lived in Cuenca, Ecuador for seven years and is currently considering a move to Medellin. We can read a lot about destinations and even visit them but the real story about actually living in them can only be told by doing it ourselves or at a minimum hearing about it from veterans.