It was pitch black inside the truck when the alarm awakened us at 4:45 a.m. It had rained during the night and Amelia was coated in a thin layer of ice. As we began to climb out of our warm sleeping bags a bright light flooded the inside of our private space. What the…? A tourist van pulled alongside of us and about 15 figures with headlamps poured out surrounding our domicile. We could see several flashes as the group started snapping selfies. “I do not believe this!” we each said in unison.

We believed we would be the first to summit the famed Montane de Arco Iris (Rainbow Mountain) if we camped at the trail head and began the trek at 6 a.m. before the tourist vans arrived from Cuzco at 8 a.m., or so we thought. Before we could even exit our vehicle another van-load pulled up and dumped its human cargo around Amelia. “O.k. this is ridiculous.” I said and threw my shoulder into the ice frozen door to open it. “What time did you guys get up this morning?” I asked. To which one of them replied “1:00 a.m.” Apparently a couple of operators billed their tour with “Be the first on Rainbow Mountain!” It’s really getting hard to be ahead of the crowds these days. In spite of our disappointment with at least a couple of dozen hikers in front of us we had our breakfast and began the trek with a young couple from Spain we had met the day before and who had camped in a tent at the site.

The trek started at about 13,000 ft. and it was cold, really cold. Ice edged the irrigation channels that crossed the trail and the backs of the herds of alpaca were covered with frost. The people who populate this area are alpaca and llama ranchers and many have taken advantage of the newfound popularity of this trek by offering horseback rides to people who find the trek too difficult or the altitude too breathtaking. They are a very shrewd bunch evidenced by the first group of horses stationed at the top of the first steep incline when hikers are breathless and their hearts are about to burst out of their chests. “Caballos (horses) 70 soles (about $21).” I have to admit it was tempting especially when they said that caminando (walking) was about four hours and the horses could do it in two. Collectively we decided to tough it out and trek on. There were men and women who were selling the rides and they were all dressed in the traditional clothing of the region. The women wore colorful dresses with wide brimmed hats and looked like they got dolled up for the day’s sales. The men wore dark ¾ length pants with colorful vests and bright knitted hats with long colorful tassels. 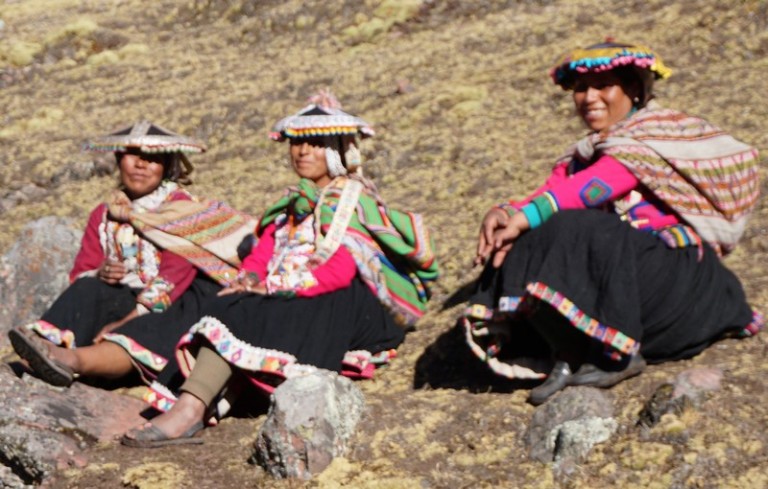 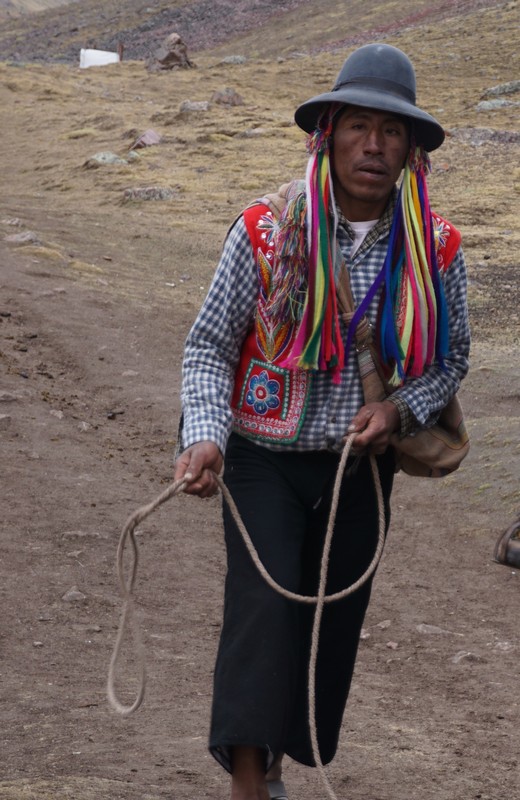 We approached the high point of the trek just as the two groups in front of us were coming down but the hordes were hot on our heels and made it difficult to take pictures without seeing loads of people. The Rainbow Mountain is a spectacularly beautiful natural phenomenon at a very high altitude of 5,050 meters (over 16,500 ft.) In the opposite direction is the glacier covered Ausnagate Mountain at 6,384 meters or 20,939 ft.! It’s all quite breathtaking, literally.

On the way down we crossed paths with the throngs who were still climbing. I had to laugh when near the top one guide was playing “Eye of the Tiger” to motivate his clients. The next song was “We Are the Champions” it was hilarious!