The small Mayan Ruin of Bonampak remained undiscovered from the time of the collapse of the settlement in about 800 AD until 1946, well over 1,000 years. In the Mayan tongue Bonampak means painted walls. Inside the relatively small Templo de las Pinturas (Temple of the Paintings) there are three rooms where the unfinished murals remain. The heads of many of the depicted people have sloping foreheads which our guide told us was the result of constant pressure that was applied to infants’ heads in order to produce this desired feature. 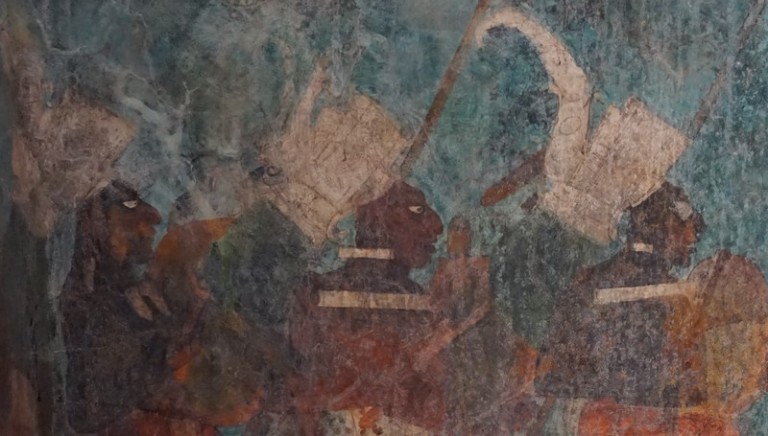 The rooms depict scenes of the consecration of the infant son of leader Chan Muan II, battle scenes with captives’ sacrifice and torture and celebratory dance and ceremonies including women piercing their own tongues in a ritual bloodletting. What a great way to celebrate the birth of the next ruler!

Unfortunately the infant prince likely never got to rule the site as the murals were never finished and the site was abandoned at the end of the classic Maya period as the civilization was dissolving.

The paintings are significantly faded but give a glimpse of the capabilities of the plasterers and natural pigmentations of the era. It’s amazing that they are as well preserved as they are given the time frame and the fact that early visitors rubbed kerosene over the murals in order to bring out the colors. The frescoes underwent restorations between 1994-1998.