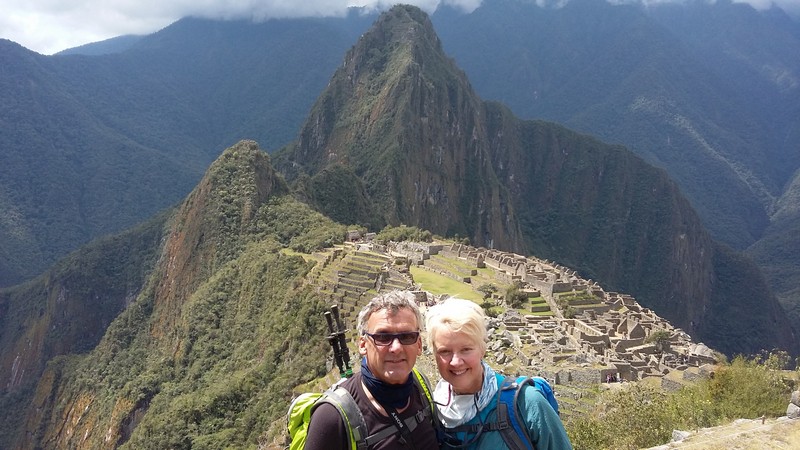 There are several ways to get to Machu Picchu and one of them is very easy on the train and bus. Consequently there are 4-5,000 visitors per day visiting South America’s most popular ruin. On our bucket list forever we had to see Machu Picchu one way or another. There are several ways to hike to the ruin including the famed ‘Inca Trail,’ a 5 day trek which we learned had to be booked approximately 6 months in advance. There were other treks which could be booked on shorter notice ranging from 3 to 12 days. We could have continued from Choquequirao if we wanted to add several days to that trek.  The bottom line was even if we took these long and arduous treks to fully immerse ourselves in the Machu Picchu experience, we would be at the ruin with thousands of other selfie taking people who just popped in by train and bus.

With all of this in mind and having already experienced a long trek to Choquequirao we decided to take the train and bus and do our best to outsmart the throngs who arrived in waves at predictable times. The launch point for visiting Machu Picchu is the pedestrian town of Aguas Calientes (hot waters) named because of the hot springs at one end of town. There are no vehicles in town except for the revolving buses that make the 25 minute drive from town to the ruins from 5:30 a.m. to 5 p.m. every day. Some people rise at 3 a.m. to hike an hour and a half or two to arrive at the entry gate to Machu Picchu ahead of the bus crowds. We heard of people trying this only to arrive at the entry gate and find a 45 minute queue! Apparently it’s impossible to get ahead of the crowds and we were told that the view is usually blocked by clouds at sunrise.

There are two mountains to climb at the site to get an alternative perspective of the full ruin. One is Wayna Picchu which is the iconic mountain behind the ruin that you see in most of the photos of Machu Picchu. It actually holds a castle-like ruin complete with cliff-clinging terraces on the steep edges of the mountain. There is a stone stairway ascending the steep slopes all the way to the top. A small number of permits are issued daily for Wayna Picchu and they were sold out for two months. The other mountain is Machu Picchu Mountain which rises to the highest point in the ruin at 3,050 meters (10,007 ft.). It rises over 2,000 feet above the citadel and offers arguably the best view at Machu Picchu as it actually looks down on even Wayna Picchu. Although we were among those who successfully summited the mountain, an hour and forty minute climb, we were completely in-cloud and could not see the ruin from the top. On the way down the clouds lifted some and we were treated with a magical view of this iconic ancient Incan Ruin. 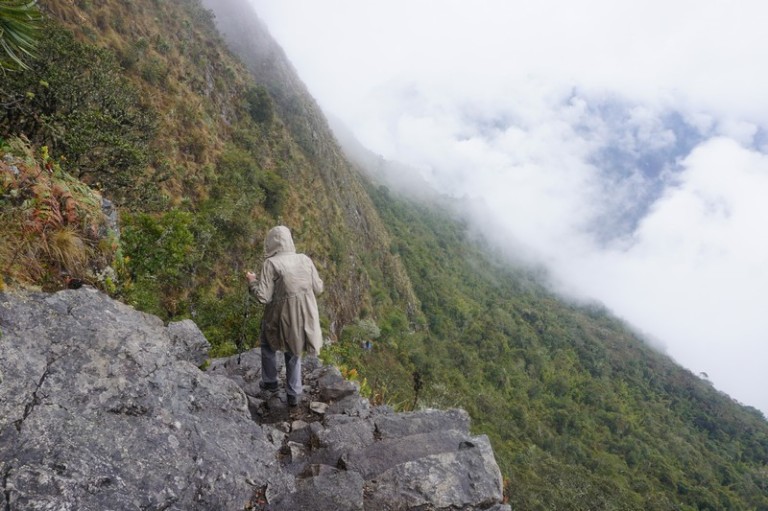 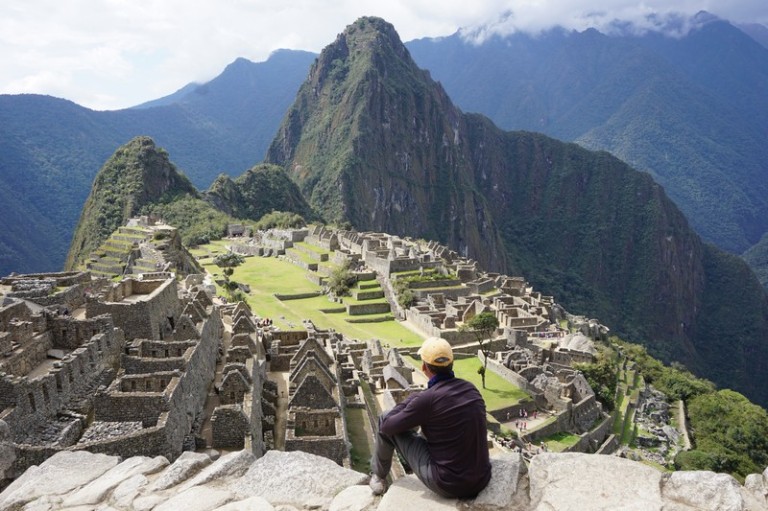 As we descended from the climb we entered the ruin during the highest volume of visitors and the crowd was overwhelming. Walking the paths of the ruin we were literally bumping into people and waiting for minutes at a time for whole streams of people to pass before we could move forward. It was easy to be disillusioned by the throngs of people taking selfies and jamming the various sites in the ruin. By 2 p.m. the crowds were thinning as the queue for the buses back to Aguas Caliente swelled. We stayed as long as we could and in the waning time we remembered why we had made the trip. In spite of the thousands of visitors Machu Picchu definitely lives up to its renowned reputation. It is a ruin of epic proportions which takes hours to explore and boggles the imagination. Built in the mid 15thcentury and abandoned a little over a century later it begs the question: Why would a society chose to build such a large scale citadel in such a remote and extreme mountain location? Perhaps if we read further we’ll gain more insight but for now there are many more questions than answers. 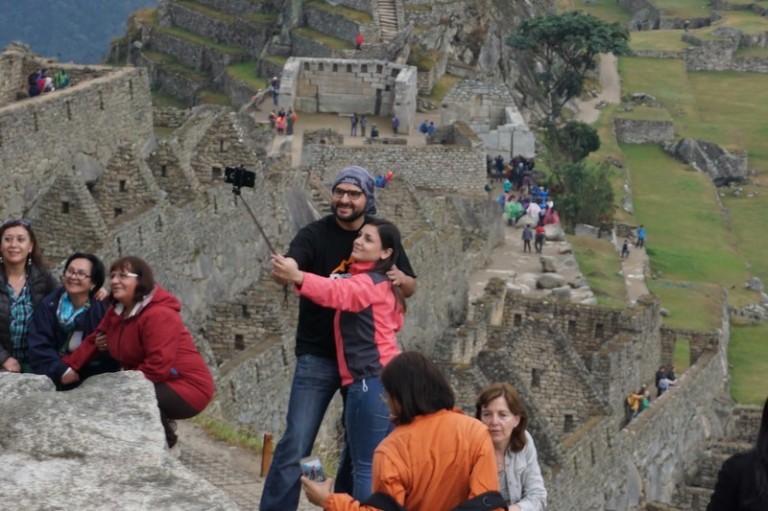 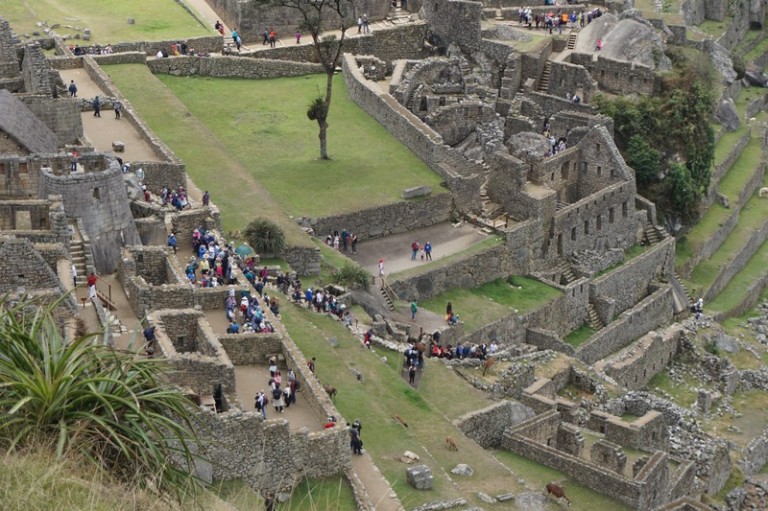 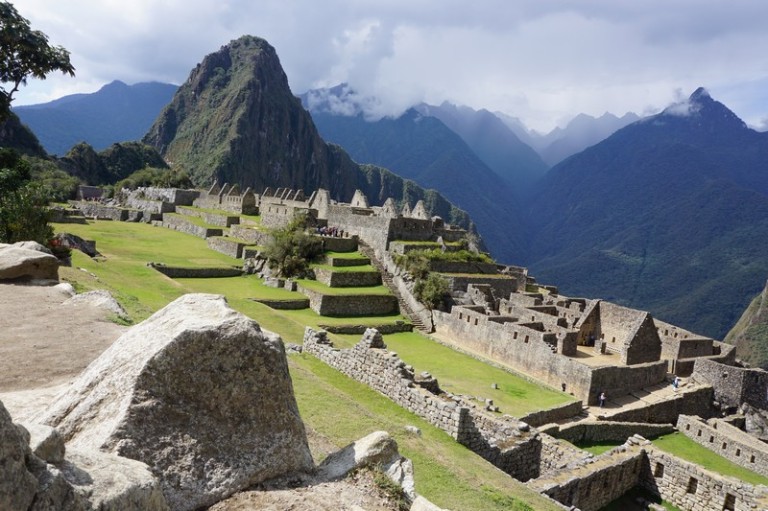