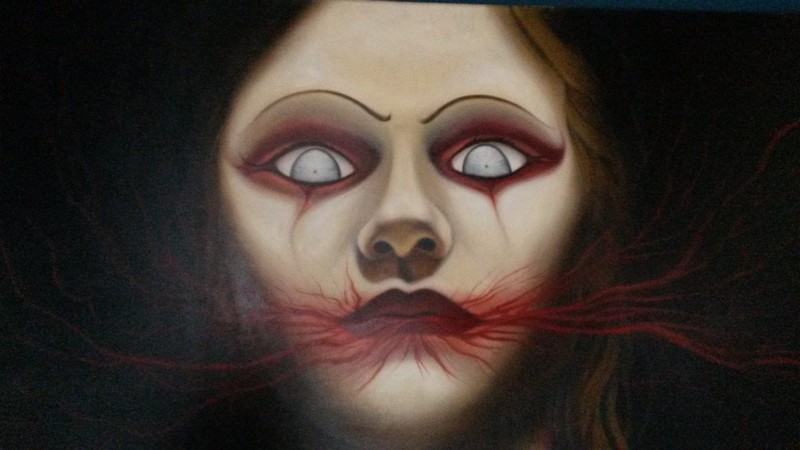 Intending to drive south from Zacatecas to Guanajuato continuing our Ruta de Plata journey we were distracted by the writing in Lonely Planet about yet another Pueblo Magico, Real de Catorce. Should we go farther north- in the opposite direction of the southern tip of South America where we planned on going eventually? Looking at google maps we realized ‘Real’, as the town is called, was only 11 hours from Austin Texas. In over three months we’d driven thousands of miles in Mexico and we’d be only 11 hours from Austin? But, the place sounded SO unusual so we went.

If unique was what we craved we weren’t disappointed. Once turning off the main road, the entrance to the town began on 15 miles of cobblestone road winding up the mountainside to 2730M (about 8,900 ft). 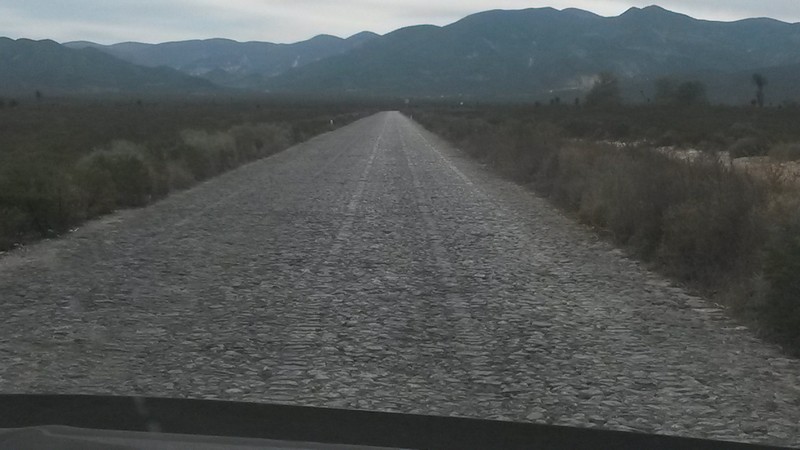 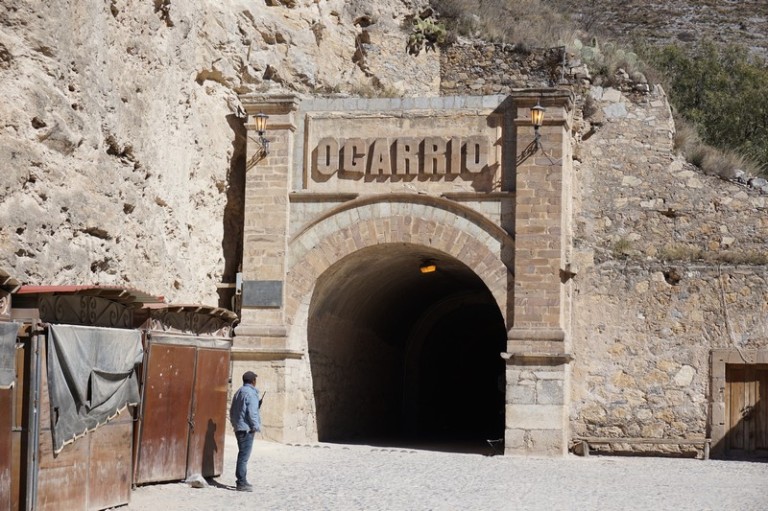 Then came the entrance to Ogarrio tunnel where we paid our 20 pesos and waited our turn to drive through the single lane, roughly chiseled, 1.4 mile long tunnel. This was NOTHING like the tunnel on the way to Durango. Seemingly unventilated, dusty, dimly lit and barely wide and high enough in some spots for our vehicle to pass through we noticed a few logs in some areas- to support a slight collapse perhaps? 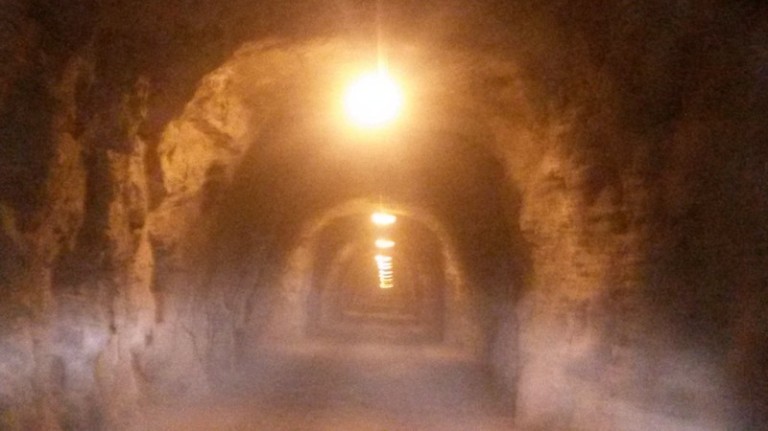 ‘Real’ locals must be used to it since every single piece of goods from the rest of the world must pass through it to reach their village. The gorgonzola cheese we ate on our fabulous pizza at Meson de Abundancia or the toilet in our hotel room and the steel rebar used on construction all came through that tunnel. For us the six minute drive was pretty spooky and the light toward the end of the tunnel was a welcome sight.

Happy to see the light of day we approached the town through a gauntlet of commerce, small stalls selling trinkets, snacks and drinks. The passages were so narrow and so steep we just didn’t know where to turn let alone park to find a hotel. Eventually we found what may be the only hotel in town with secured parking up an impossibly steep road and after Jay’s dozen passes to turn into an impossibly tight opening we managed to settle into lodging with outrageous views and the first bathtub in three months.

At one time, Real was a wealthy silver mining town of 40,000 until early last century when it became nearly deserted. This now functioning ‘ghost town’ of 1300 sitting high on the fringes of the Sierra Madre Occidental has experienced a revival of sorts. There remain plenty of ruins but investors (some Europeans) have come to restore buildings and run businesses. 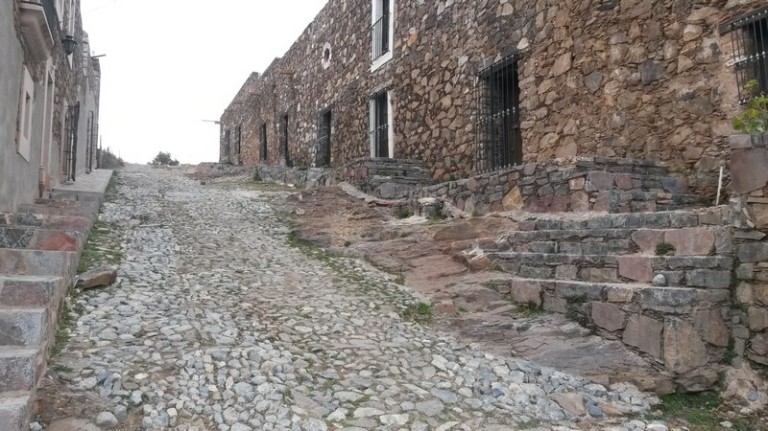 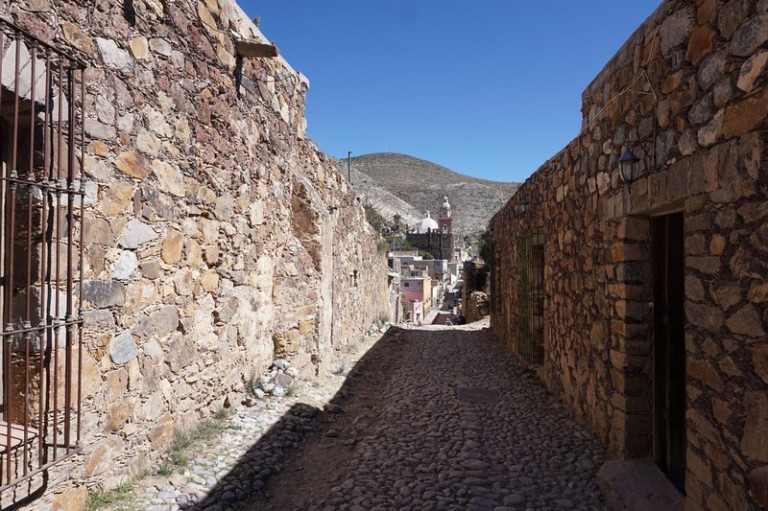 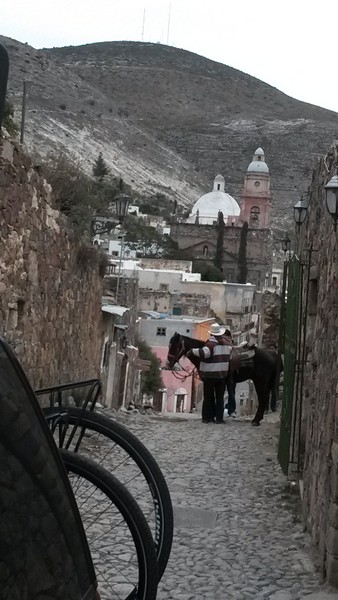 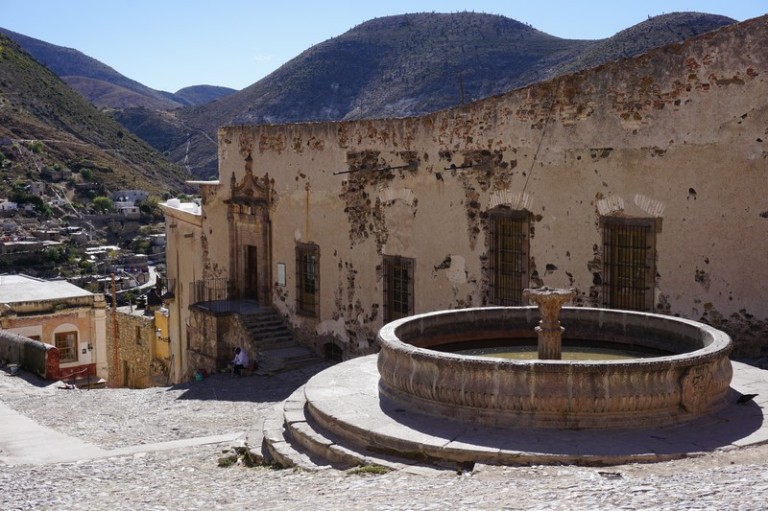 Templo de la Purisma Concepcion, the parish church attracts thousands of Mexican Pilgrims to view the miraculous statue of Saint Francis of Assisi in front of the church. A cult following has grown around the statue whose help is sought in solving health problems and cleansing sins. Retablos, small images of problematic situations like wounded body parts or auto accidents are left in the church. 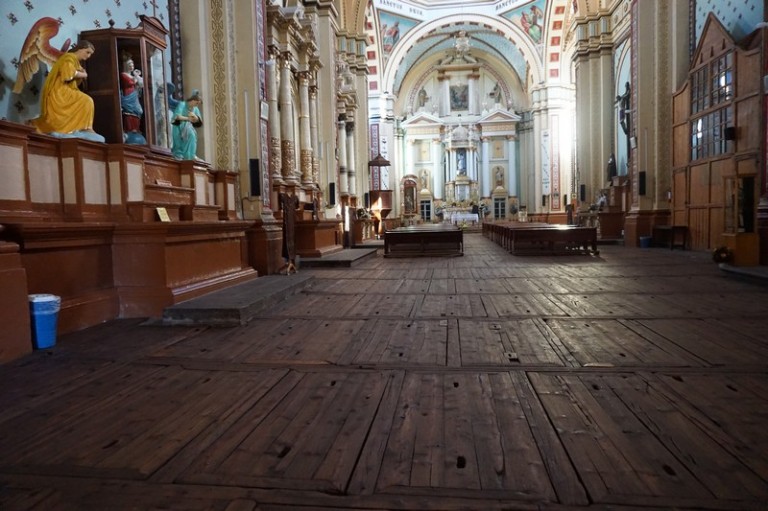 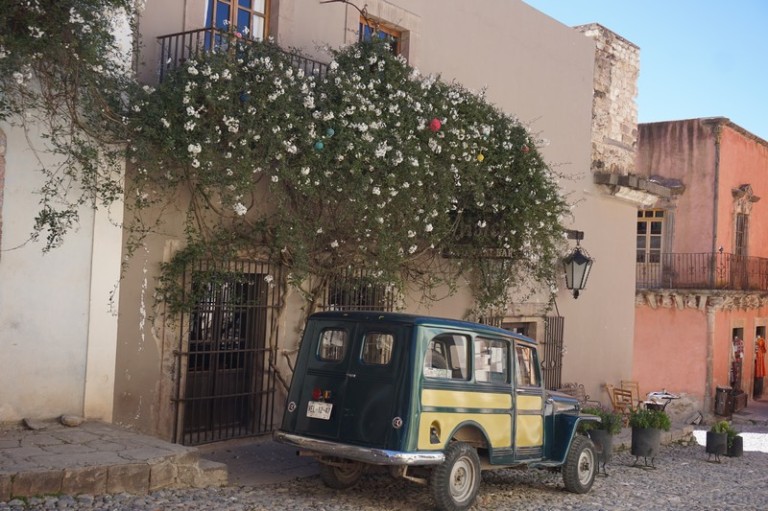 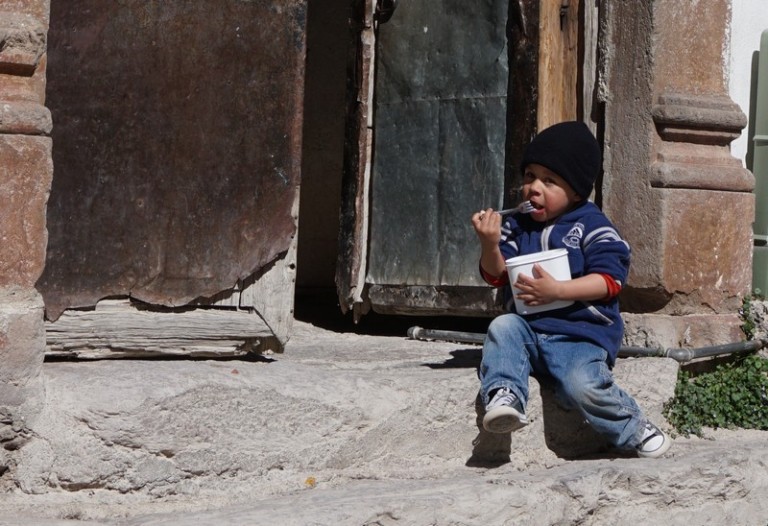 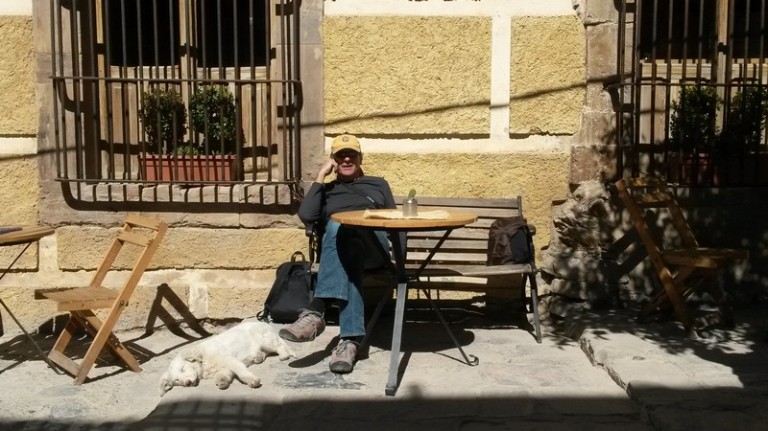 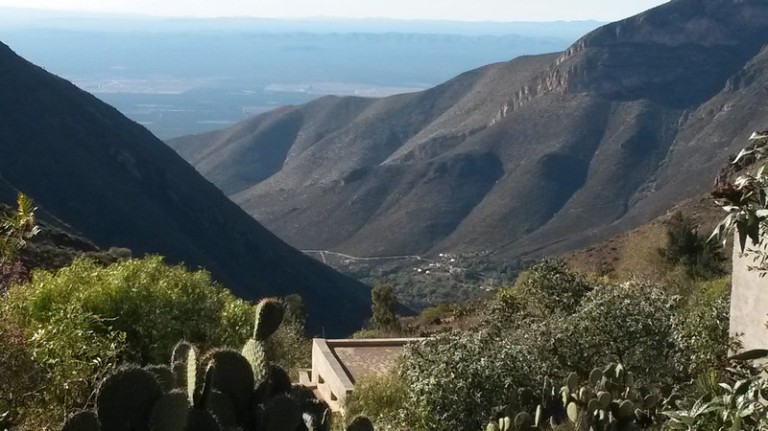 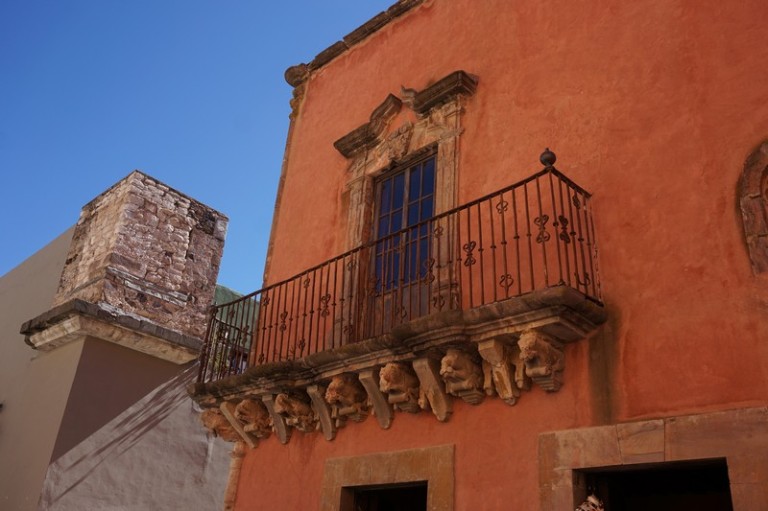 Another but very different kind of pilgrimage to the Sierra de Catorce is made annually by the Huicholes, one of Mexico’s most distinctive, enduring and independent indigenous groups. 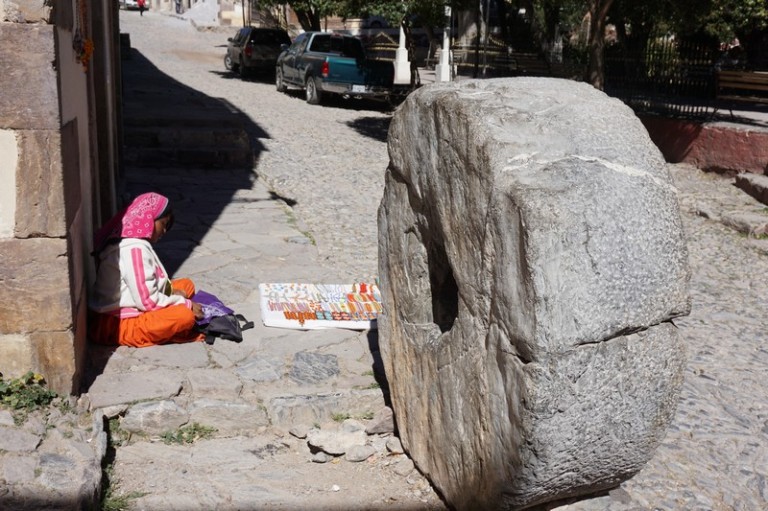 The Spanish missionaries initially had little success converting the Huicholes to Christianity. Then in the 17th century they combined some Christian teachings into their traditional animist belief systems. In this harsh desert region they seek out the mescal cactus, known as the peyote cactus.

The peyote ‘buttons’ containing a powerful hallucinogenic drug (mescaline) is central to the Huicholes’ rituals and visions within their complex spiritual life. Although peyote is illegal in Mexico it is allowed for spiritual purposes by the Huicholes only and is considered offensive or sacrilegious if used casually.

During our first evening in Real we saw quite a few visitors mingling about the ruins and in a few of the restaurants. On day two we planned to visit a bar where visitors usually congregated. Cerrado (closed). Walking up and down steep cobblestone paths we found a restaurant we’d read about. Closed. We wobbled down the more and more dark and deserted passages to the restaurant we dined in the previous night to find some people we’d met the day before. No guests were registered and the restaurant-closed. 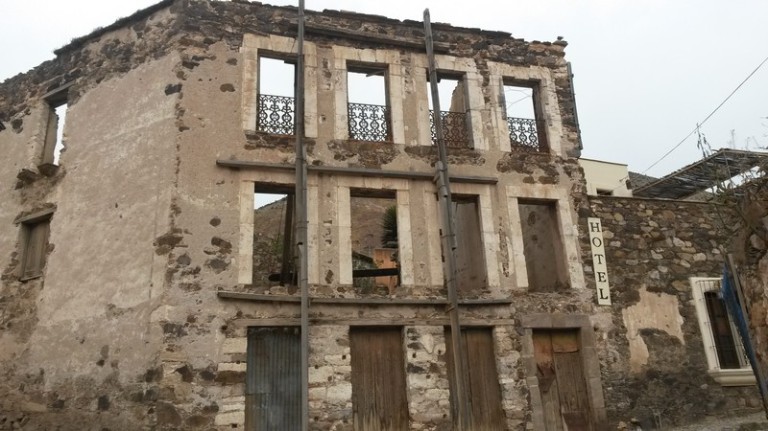 The street seemed darker; we were getting thirstier, hungrier and a little weary and lonely on the nearly deserted streets. Had we halucinated the people we’d met? “This is beginning to feel like the Twilight Zone,” Jay said. Finally while eating a torta (sandwich) at the only open food truck we found, the cook told us it was tranquilo (tranquil) and there would be snow manana. Enough information- we would cut our stay short by a day and leave in the morning, we decided. The intended hike to the next ghost town wasn’t going to happen in the snow. 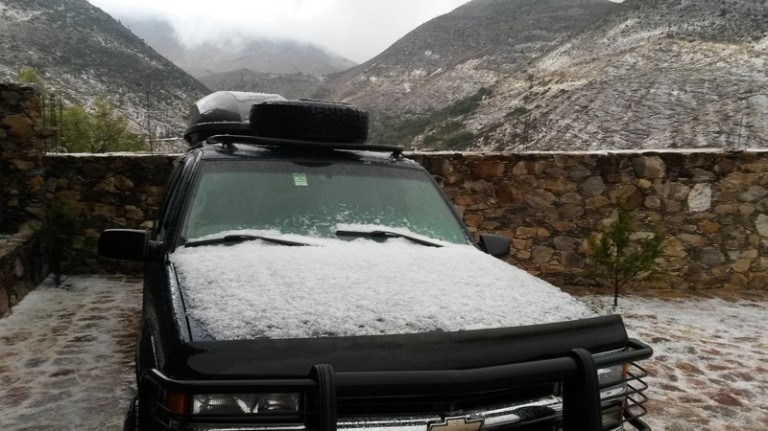 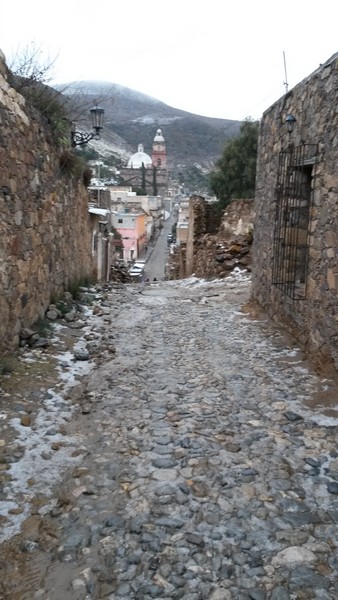 Sure enough, we were awakened in the morning with quarter size hail.

One thought on “Peyote Detour, Into the Twilight Zone”