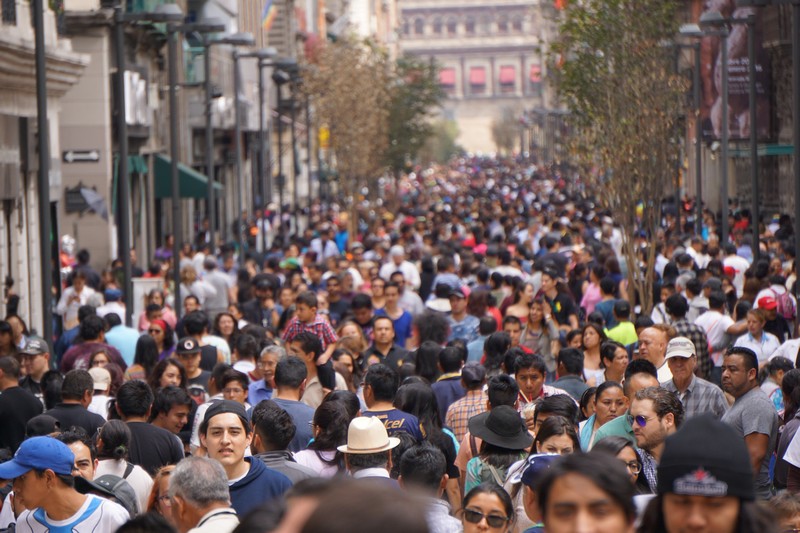 Travel throughout Mexico for six months without a visit to Ciudad Mexico just wouldn’t be complete. The intimidating, massive megalopolis Ciudad Mexico (CDMX), formerly known as Distrito Federal (DF) is comprised of 16 deligaciones (boroughs) which are divided into 1800 colonias (neighborhoods). Its population is almost 4 million larger than the top 4 most populous U.S. cities combined.

It is an unending sea of buildings, people, thoroughfares, smog, grit and yes…traffic but we decided that it was a must see. We’ve been spending a lot of time in colonial highland cities which have been fascinating but there is such a thing called monument fatigue and we both have a case of it. Longing for some time in nature, we decided to limit our visit to an insufficiently brief four days. It would take weeks and much more patience and stamina than we had at that point in our journey to explore all that CD MX had to offer so we chose to focus our time in Centro with an excursion to the Pyramids.

I booked a hotel with secure parking but then, thankfully we came to our senses. Why on earth would we attempt to drive our large vehicle with bicycles on the back into that madhouse? Relying on GPS to get us to our hotel would be risky at best. When we departed Patzcuaro, a town of only 50,000 we were directed down two dead end cobble stone lanes the width of our vehicle. Left without any alternative Jay proceeded to drive in reverse up a steep hill as the entire neighborhood watched and while I just about had a heart attack. If these type of errors occurred in small towns what would happen in Mexico City?  With plan B, we parked in a secure hotel parking lot near Toluca and took a one hour bus ride into the city center and were we glad we did!

Driving over the sea of asphalt that now exists over this highland basin, it was hard to imagine that only five centuries ago it was filled by a chain of lakes. The downtown we traversed today was built on an islet criss-crossed by canals and the communities which lived here spoke many languages nothing like Spanish. When the Spanish arrived on the shores of this Lago de Texcoco in 1519 they reportedly were amazed by the sophisticated city-state of Tenochtitlan with its networks of canals, thoroughfares and raised gardens. By the time of the Spanish conquest in 1524 their awe didn’t stop them from systematically razing the structures from the Aztec period and rebuilding it as their own. Ravaged by disease, the Valle de Mexico’s population shrank from about 1.5 million to under 100,000 within a century of the conquest.

Templo Mayor is an ancient pre-Hispanic ruin that’s been excavated in the center of the city. The excavation didn’t start until in 1978 when construction workers unearthed “the moon goddess,” a huge monolithic disc stone carving over 10 ft. in diameter, almost 12 in. thick and weighing 8.5 metric tons. Thirteen Spanish colonial buildings were raised for the excavation. The site originally housed the gigantic twin temple of Tenochtitlan, the Aztec capital of the ancient city which is now Mexico City. The site was rebuilt over 6 different times as the great weight of the monuments slowly sank into the marshy ground. Even today Mexico City is slowly sinking and it is clearly evident in several of the Colonial era buildings that are off plumb and level.

Mexicans have been known to express emotions through painting and Mexico City is one of the main hubs of Mexico’s art world. We had seen photos and watched documentaries about Diego Rivera but nothing can describe or compare to standing in front of his enormous masterpieces. We viewed Diego murals at Museo Mural Diego Rivera, Palacio National and Palacio de Bellas Artes where the famous El Hombre en el cruce de caminos (Man at the Crossroads) was originally commissioned for New York’s Rockefeller Center. The Rockefellers didn’t take very kindly to the anti-capitalist themes and had the original fresco chiseled off and destroyed but Rivera recreated it here in 1934.

Our hotel in cento was a short walk to the Mercado San Juan. With so many choices for eating we loved Gastronomico San Juan where twice we chowed on French bread sandwiches with a variety of Mexican and international cheeses and Jamon serrano (dry-cured Spanish ham). While sipping the free red wine served with our sandwiches we met a young local woman who was clearly what we would define as a foodie. She apparently thought we might be hip enough for viejos (old people) to appreciate some insider recommendations which she referred to as her “underground” bests. We had a night on the town with more mescal than we needed and stoked our taste buds on some combinations of flavors never before experienced in a tiny slow food restaurant that didn’t need to have the name out front.