How to navigate our way to Oaxaca while circumventing Mexico City became the next challenge. I have come to rely on Lonely Planet extensively for trip planning and once again we were lured into visiting a few more Pueblo Magico hamlets in a not so direct (but interesting) route to Oaxaca. The Mexican government has designated 50 or more towns Pueblo Magico for their cultural, historical and natural relevance in order to promote tourism and boost the local economies. Based on our humble opinions, some of these towns are more “magical” than others but the following are the highlights of a few more of them.

MALINALCO, in the state of Mexico, is set in a valley of dramatic cliffs and ancient ruins. The small village of about 7,000 at 5,700 ft. elevation has a small colonial core around a zocalo (central plaza) which was under renovation during our visit. It has become a weekend getaway from Mexico City with some boutique hotels, hippie stores and international eating choices one wouldn’t normally expect to find in a small Mexican town of this size.

The primary attraction is the restored temple located 350 or so steps above the village with beautiful views of the town and surrounding cliffs. The archeological sites near these small pueblos were home to or gathering places for Mesoamerican tribes and sub-tribes so numerous that you’d have to be a historian to keep them all straight. Never the less each site has something that bewilders and astonishes a casual observer. Monolithic architecture, where a temple is carved into solid rock, is very rare worldwide. Other monolithic temples include Petra in Jordan and Abu Simbel in Egypt. This tiny site, Cuauhtinchan, is the only such site in the western world, so they say. Perched on top of the cliffs overlooking Malinalco this is where an Aztec warrior class was trained to be either Jaguar or Eagle warriors. It took a lifetime of study and devotion to reach the top of either class. There was just one warrior who attained the top of both classes and he became the supreme ruler of all of the armies in all of the surrounding provinces. The training was rigorous and captured enemies were used to enhance the warrior’s prowess by being partially tied up while the warrior practiced weapon use on them as well such things as skinning the poor bastards alive.

TEPOZTLAN, Morelos, a town of about 14,000 at 5,600 ft. is another (closer) weekend retreat from Mexico City. It is a mecca for New Agers believing in its creative energy. The historic center is well preserved and the cliffs surrounding the town are indeed dramatic. It is easy to understand why this place would draw weekend crowds escaping the big city. The food choices differ by region and just when we think we can finally maneuver a menu easily we come into a region with a whole new lexicon and we have to begin again. The restaurant Los Colorines brought the regional chiles rellenos (stuffed chilies) to a whole new level for us- wow! The selections bubbled in the cazuelas (clay pots) for all to see the variety of fresh and traditional dishes. 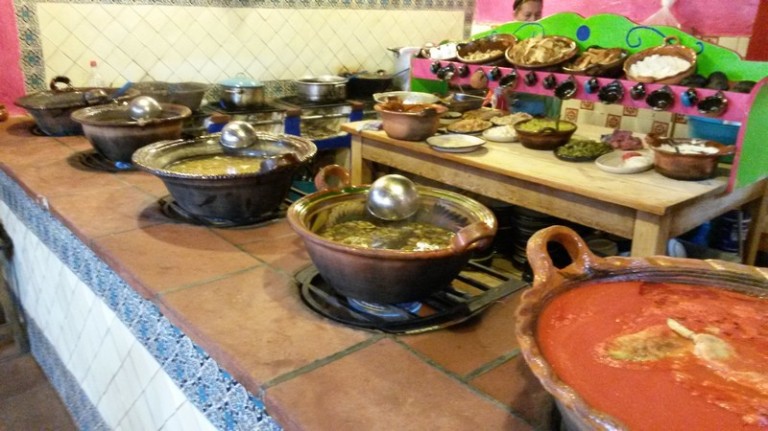 The main sight near this town is a pyramid perched on top of a high cliff overhanging the town. The hike up to the pyramid was a workout. We’ve been walking around towns and cities for hours on end and occasionally enjoy getting out of town for hikes like this one. We’ve wondered, how can it be that we’re gaining weight? But then, we get real and acknowledge all the great regional food we’re packing down!

Another pyramid, though relatively small in size at just 10 meters (32.8 ft.) tall, Tepozteco, sits high atop sheer cliffs some 1,300 feet above town. Built to honor the Aztec god of harvest and fertility the most amazing thing about this site is the extremely steep path to get up to it. Though the path is very well built and maintained with stone stairs and platforms all along the way, the hike is somewhat aerobic at over a mile high. At the top there is quite a large number of local animals called Coatis which are quite bold and will stop at nothing to get a snack from the hikers. 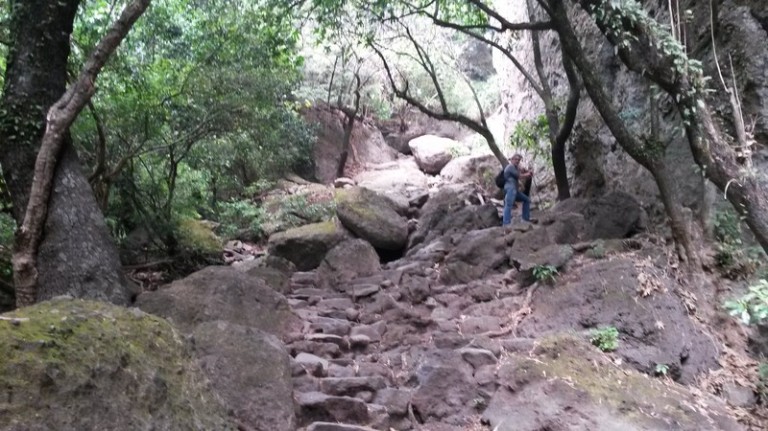 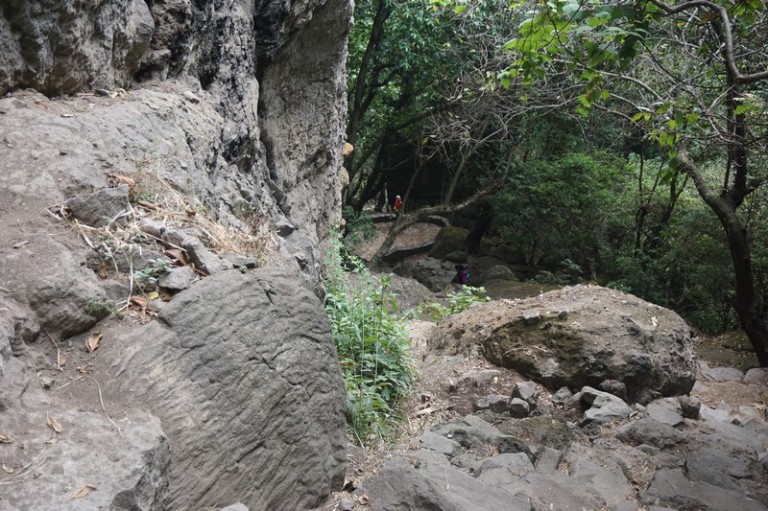 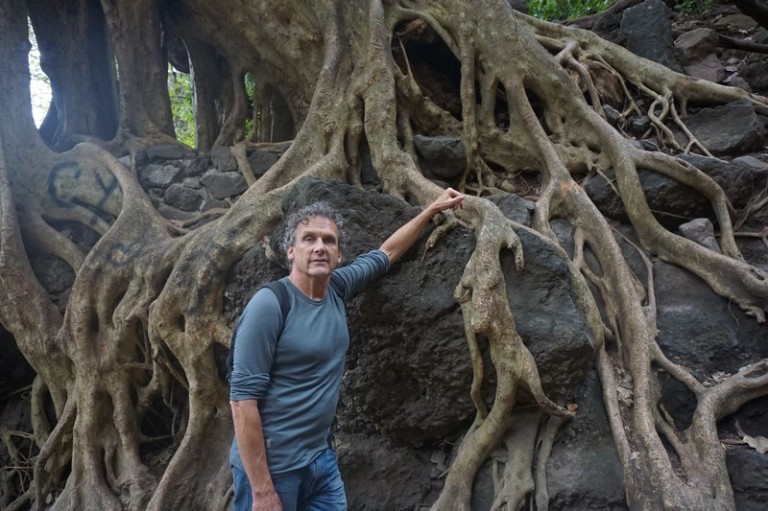 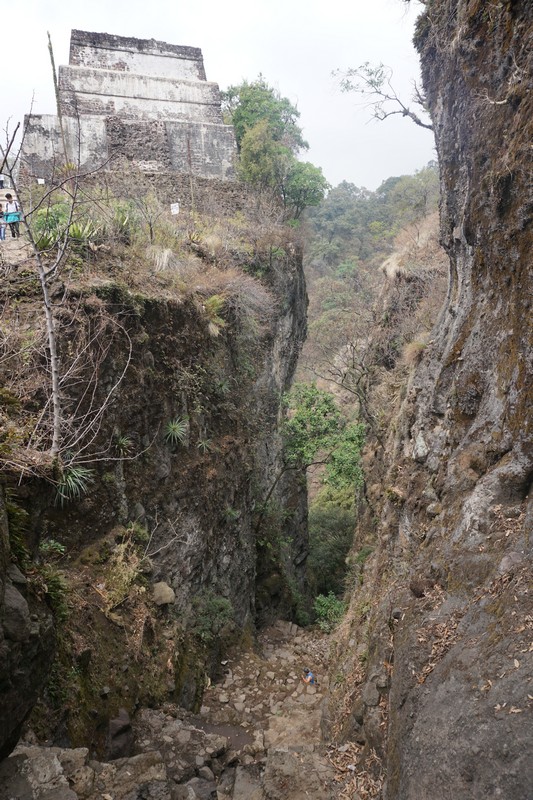 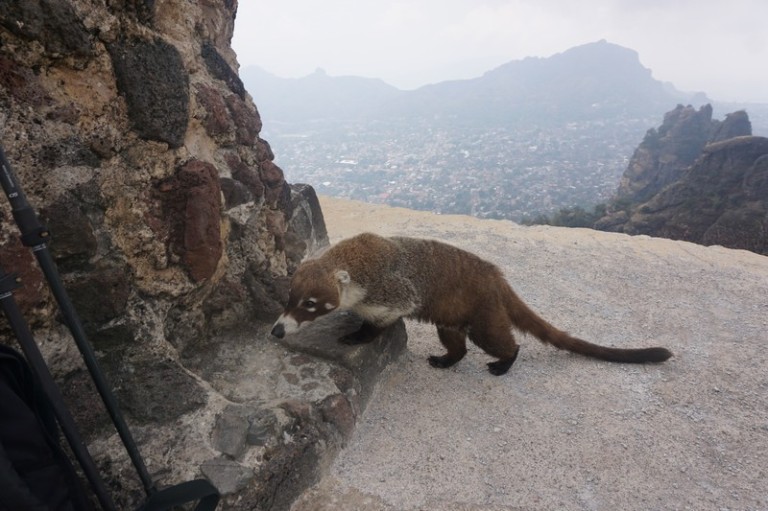 HUGE MOUNTAINS- On the road between Tepoztlan and Coatepec we looked out the car window and were shocked to see a huge snow-capped peak looking very much like a volcano. Further in the distance there was another peak also covered in snow. I was quite surprised to see snow at this latitude and surmised that they must be quite tall. Later while looking to find these mountains on Google maps we saw that indeed they were the second and third tallest mountains in all of Mexico: Popocate’petl at 17,749 ft. and Iztacci’huatl at 17,159 ft. 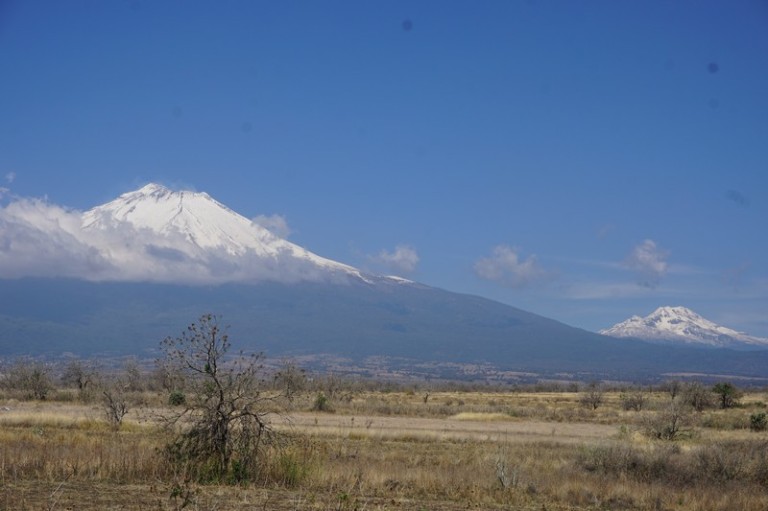 COATEPEC, in the state of Veracruz with about 54,000 at 4,000 ft. has been the center of a region for coffee growing in the surrounding cloud forests since 1701. The crop brought wealth to the town evidenced by the rich colonial buildings. It’s only 15km south of Xalapa, the state capital of Veracruz. We only drove through on our way to the neighboring smaller village of Xico but yes- we could smell the coffee.

XICO, Veraruz, population about 19,000 at 4200 ft. elevation is only 8km from its big sister Coatepec. It is known for perfecting varieties of mole (chocolate based sauce). Upon entering the Xalapa, region we were struck by the contrasting vegetation and climate to the previous dry desert not far away in the state of Puebla. It was very humid in the green cloud forest. During a down pour of rain alongside the river at our hotel restaurant while eating our trucha (trout) mole we felt like our skin was getting a long overdue infusion of moisture. 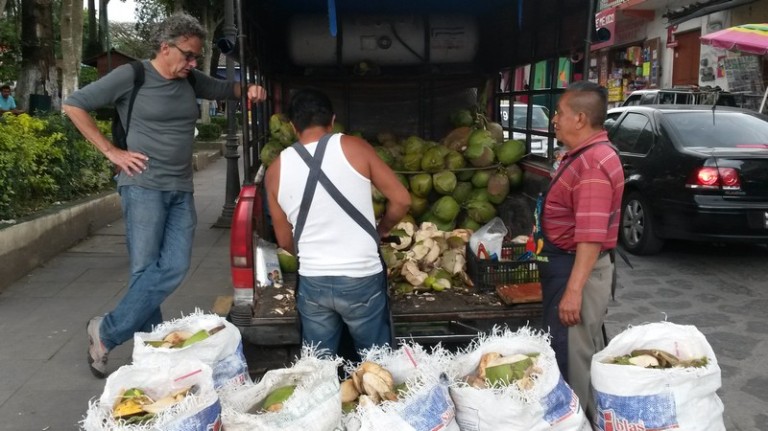 The Cascada de Texola, a plunging 262 ft. waterfall is a local attraction. We visited on Sunday when locals spend a family day relaxing and hiking to the various lookout points. The movie, Romancing the Stone (1984) filmed a scene with “stone” hidden behind it.